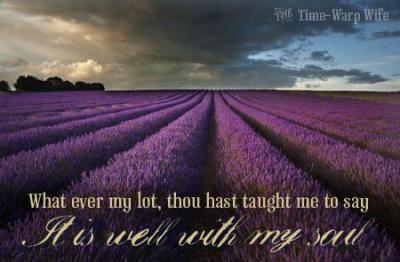 Last night, as I was walking around our neighborhood, I met a couple and their daughter who recently moved here from New Mexico. I had been wanting to meet them, and was excited about our chance encounter. When I first spotted them from a distance, I noticed they were pushing a wheelchair. For a moment, I thought perhaps it was an elderly parent, but as I got closer I realized it was a young child. In talking with them, I learned their daughter was twelve, but has the mental capacity of a two year old. The mom joked that she had been raising a toddler for ten years and I was relieved by her light heartedness.

As we stood in the middle of the street, talking and getting to know each other, another couple passing by joined us in our conversation. I had met them before and knew that they too had a daughter with special needs who was wheelchair-bound. Standing there, I found myself thinking “What a group.” From the outside, we look like any “typical” group of 30 and 40-something neighbors. Two doctors, a stay-at-home dad, a stay-at-home mom/marathon runner and a stay-at-home mom “with the pretty front yard.” Yet, there we stood, two families with special needs children and one alcoholic stay-at-home mom. Eventually, we said our goodbyes and I continued on my walk around the neighborhood.

Today, as I was reflecting on our neighborhood gathering, I found myself thinking how our lives rarely turn out how we imagine or expect them to be. Oh, believe me, I had the perfect plan for how my life would turn out. I would go to college, get my master’s degree, get married, have two children by the time I was 30 (preferably boy and girl) and live happily ever after. What I forgot to plan for was all the stuff in between and the unexpected.

I never planned for my parents to get divorced or to suffer from anxiety and OCD. I never planned for my mom to die at such an early age; I never planned to almost lose my marriage and family; and I definitely never planned to be an alcoholic stay-at-home mom. I’m not alone. We all live with the unexpected. On the six month anniversary of the Newtown shootings, I think of the families who never expected in a million years that they would lose a loved one to such a tragic event; or the two local families who recently lost their 18 and 19 year old children to car accidents; or the families I spoke to last night who never expected to have special needs children.

The thing that gives me hope and leaves me in awe is despite the unexpected, we continue to live. Despite the pain and suffering, we still wake up each morning and face the day. Instead of asking “Why me?” we ask “Why not me?”

I used to be really pissed at God for how my life turned out. I’ve always been a planner and this was NOT my plan. Eventually, I stopped being angry and started living – what other choice did I have? I truly believe that God doesn’t give us more than we can handle – maybe we think He does, but He doesn’t. He knows us better than we could ever know ourselves and that gives me peace. We realize this when we think we have lost all strength to go on, yet somehow, someway find the strength to continue.

As I looked around at my neighbors last night, I saw that strength firsthand. Strength in living and doing the unexpected.