As I’ve mentioned in previous posts, I have suffered from anxiety, depression and Obsessive Compulsive Disorder (OCD) from the time I can remember. For better or worse, it’s part of who I am. I wasn’t always comfortable admitting I had all these “issues,” but, eventually, you just have to accept it and do your best with what God gave you. Over the years, I have learned various ways to “deal” with my mental health issues – mainly counseling, medication and getting sober (that was a big one).

The thing is, I never even realized that those drinks could actually be making my mental health issues worse. So, you can imagine my surprise when I came across the new health guide created by treatment center, Yellowbrick, that states the “Ten Mental Health Reasons Not to Drink Alcohol.”

It was like the first time I took one of those “are you an alcoholic?” quizzes. As I read down the list, I mentally made a check note by each one: interrupts normal sleep patterns (check), leads to rebound anxiety (check), contributes to increased impulsivity (check, check), interferes with prescribed medication (is that why my Prozac wasn’t working like it should’ve?). 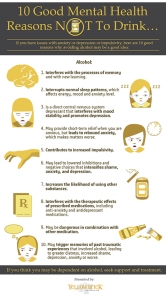 I’m by no means telling “normal” people not to drink alcohol in moderation, but the reality is a huge percentage of our population suffers from anxiety and depression. If those people were more aware of the real effects drinking had on their mental health issues would that change their drinking patterns? Would they think twice about having that second, third or fourth drink? Maybe.

I’m a firm believer that knowledge is power and if we arm ourselves with the facts, we might be able to make different decisions in the future. Decisions that could potentially change the future of our health for the better.