Hey friends! Here we are at the end of 2017 and I’m already making ANOTHER new year resolution to write more here in 2018. Really, I’m going to try hard to make that happen.

I’m not sure where 2017 went, but it flew by! As I write this, I just took my first shower in two days, my face is breaking out (probably too much sugar) and I’m attempting to remain calm and collected in the midst of holiday chaos – easier said than done! However, with all that being said, I’m happy – really, truly happy. Not just, “I’m saying that because that’s what you want to hear.” No, I’m saying that because it’s the honest to goodness truth.

After being on our little farm for over two years now, I can say without a doubt that moving to the country was the best decision we’ve ever made. Not only was it good for our family, but it was good for my sobriety. I feel free here; free to be the person I was meant to be. When people ask me what I’ve gained through sobriety, I will often tell them I gained myself. I’ve discovered what I like and what I don’t like, and I suppose, most importantly, I’ve given myself permission to be honest about those likes and dislikes.

I’ve discovered that I don’t particularly like being in large groups of people or being forced into casual conversation. I don’t like spending time with negative people who leave me emotionally drained. This one’s hard because I really wanted to like it, but I’ve realized that I don’t like entertaining and hosting large groups of people at my home. My home is my sanctuary; it’s my safe place to escape from all the craziness of the world and having other people here often feels suffocating to me. I’ve accepted that I’m more of a one-on-one type of person. I want people in my life who will sit down and have real and honest conversations.

And, what do I like? I like routine. I like my morning coffee with my husband. I like working in my yard and garden while the kids play and laugh in the background. I like the thrill of chasing my chickens around the garden until I’m able to catch one (I know, weird!). I like binge watching historical dramas on Netflix. I like trying out new canning recipes, especially jams and jellies. I like the anticipation of planning my garden for the next spring. And, at the end of a long day, I like sitting around the table with my family, giving thanks and hearing them talk excitedly about their day.

For so many years, I feared living my life based on my real likes and dislikes because I was scared of disappointing or offending someone. These days I don’t feel the need to have everyone agree with me or even like me – they won’t and that’s okay. There is an incredible sense of freedom in letting go of the pretenses and being honest with yourself and others.

Comparatively, my life now might sound boring and uneventful, but I will be the first to lift up my arms and say, “Amen!” Boring? I’ll take it! Uneventful? Even better! Through hell and high water, I have learned that in boring and uneventful we often find the greatest peace and contentment.

Tomorrow, we celebrate my son’s ninth birthday. He was three when I got sober and with every passing birthday, I’m so incredibly grateful that he will never have any memories of me drinking. Sometimes, I try to imagine what my life would be like now if I had never stopped drinking and, honestly, it makes me physically sick to my stomach because I know that I wouldn’t have any of it – this beautiful, flawed, painful yet grace-filled life.

I wish you all a very Merry Christmas and a blessed new year!

I don’t know what it is about drinking and the holidays, but it’s like the flood gates are thrown open and people start guzzling bottles of champagne and wine like the apocalypse is coming. I can barely scroll through my social media feeds without seeing an alcohol related post. I get it people. You’re stressed out, you’re still pissed off about the election, you’ve had it with your boss, your kids are driving you crazy – you NEED a drink! Well, for those of us who have “been there, done that” we know that getting sloshed will never be the answer and we will do whatever we can to protect ourselves from the onslaught of “if I only had a drink” type of mentality being thrown in our faces. Yes, this is what people in sobriety have to deal with ALL OF THE TIME. Like it or not, we live in a society that is obsessed with drugs and alcohol.

Despite having been sober for awhile now, the holidays still cause me anxiety. It’s a given that I’ll be in situations where I’ll be around more drinking than I normally would. And, it’s usually a given that someone will say something that’s disrespectful or ignorant in regards to my sobriety. While I’ve come to expect these things, I still take measures to protect my sobriety, including:

No matter how long we’ve been sober, I think it’s always good to go over some of these reminders during the holidays. If you’re new to this sober thing, don’t be afraid to reach out to other sober people along the way. We’ve been there and we know what it’s like to feel isolated and alone. But, one thing we’ll all tell you, is that you’re not alone! There’s millions of us out there who don’t drink and don’t HAVE to drink during the holidays. We’ve made the decision to have sober and therefore memorable holidays, ones we can be active participants in, not only bystanders. Just another gift of sobriety.

I’d love to hear other ways you stay sober during the holidays!

So…it’s been a long time. And, I’ve completely neglected this blog, but I’d like to think it was for good reason. In the beginning of sobriety, we often wonder how life will go on. How will we function without the daily drinks or glass (or um, bottle) of wine? How will we handle social situations? How will we ever make up for all the harm and destruction we have caused? We slowly see the need for a new normal, but the reality of it being long-term is terrifying. And, then we start to question if it’s all really worth it. Wouldn’t it be easier to go back to our old normal, the normal we were so used to and comfortable with? But, we know we can’t if we want to keep our families, our marriage, our children – our life.

If we’re one of the lucky ones, we begin to reluctantly accept the new normal. Like a child taking their first steps, we slowly, carefully venture into the unknown. We fall, we skin our knees, but we continue until we gain our balance and walk slowly, but steady. And, then the day comes along when we realize we’re running.

It’s not the path we intended to take, but it somehow got us where we needed to be – where we were meant to be all along.

On August 28th, I celebrated three years of sobriety. The day came and went without a lot of excitement or acknowledgment. Most of all, I felt peace and contentment.

Over the last month, we have moved to what we consider our “dream house.” It’s an older home on two acres in the Oregon valley with room for the kids to run and for us to have a big garden and raise a few animals. During the first week we were here, my husband and I were standing in the kitchen and he turned to me, and hugging me said, “This is the happiest I’ve ever been since we’ve been married.”

I will never forget his words or how they made me feel – totally and completely loved. All of the pain, anger and hurt I once caused and felt has been replaced with a love I never knew possible.

Every day I thank God for my plan B and this new normal I was blessed to have. 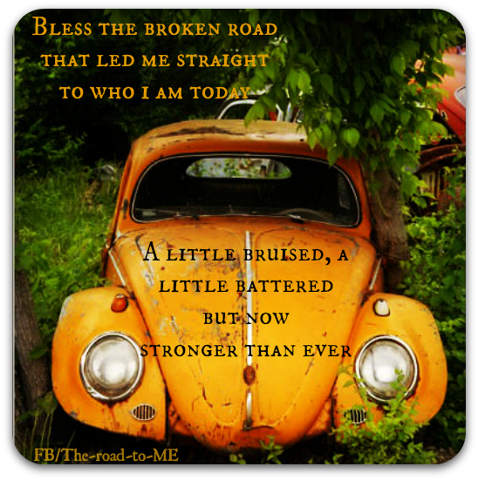 I found this photo fitting since I just got a new VW. I’m sure one day, years from now, it might look like this too. Old, tattered, but well-loved. Kind of like me, however, I wouldn’t consider myself THAT old – yet!

Today, I will attend a women’s meeting and get my six month coin – for the second time. How do I feel? I’m happy, I’m content, I’m not perfect, but I’m trying to be the very best version of myself that I can be and that God intended me to be.

The difference this time around, I’m not angry anymore. I’m not angry that I have the disease of alcoholism. The obsession to drink has been lifted and for that I am truly grateful. Once I was able to let go and surrender to God, I felt free. Free from the anger, the cravings, the guilt. I got to the point of acceptance. I accept the “broken road” that God has led me down. At first, I tried to fight it. God knows, I tried with all I had to fight the truth.

But, the truth is, once I stopped fighting, I was finally able to start living. I love my life today. I still struggle, but I now have the strength and courage to get through things without drinking. Drinking is not my crutch anymore; I have to face things head on. It’s not easy sometimes, but it feels so good – to feel. I feel hurt, anger, sadness, but I also feel an immense amount of joy, happiness, peace and contentment.

Sobriety has given me the opportunity to live, to try new things, to write again. I have so many desires and wishes for my sober life. It’s exciting and sometimes it’s overwhelming because the possibilities are endless.

I have to stop, quiet my thoughts and ask God what direction I should take. I trust in His path for me. I don’t have a plan anymore and that’s okay. With each day, He’s guiding me and revealing to me where to go and what to do.

Today, I am grateful to be alive so I can share my experience, strength and hope with you.